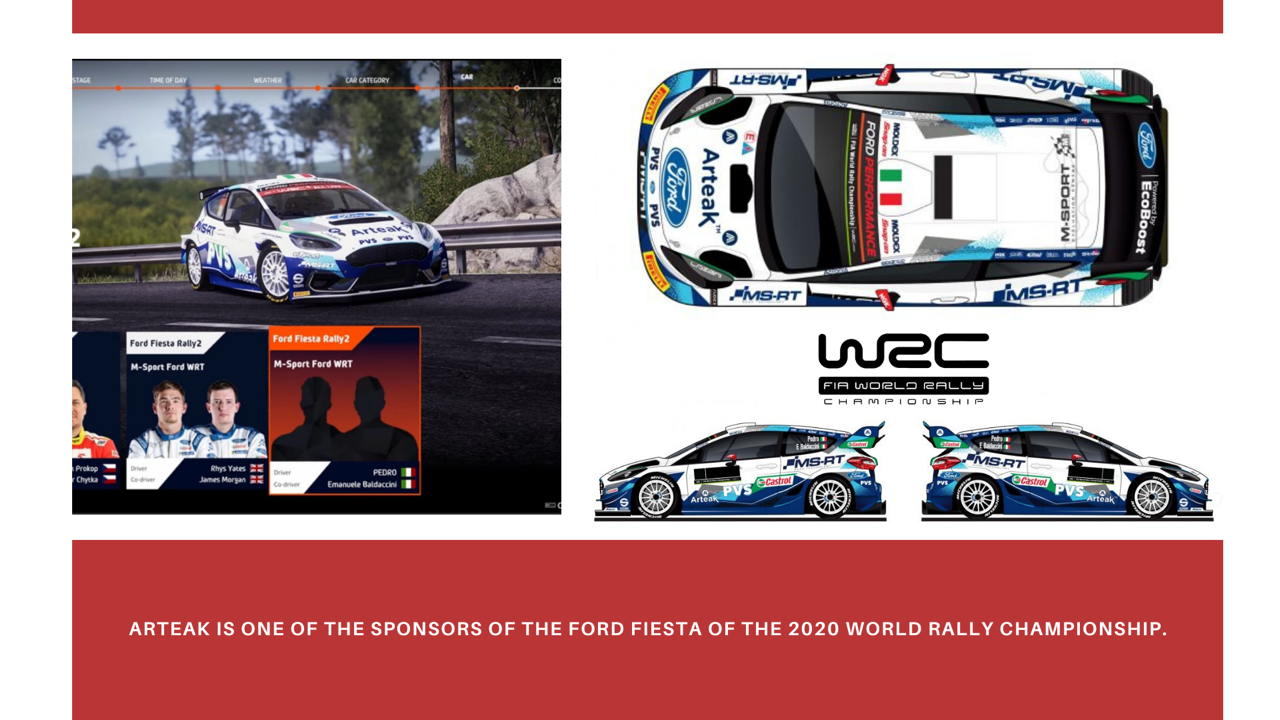 Safety is our priority. Today we would like to introduce a lighter subject: it is a curiosity that will help you get to know our company better and what we are proud of.

Did you know that the Arteak logo is present in a video game?  It is the WRC game that was released this year!

Arteak is one of the sponsors of the Ford Fiesta of the 2020 World Rally Championship.

The championship includes a series of stage races (currently 13) held in countries around the world from the end of January to the beginning of November:  each race consists of a certain number of timed trials, called special stages, generally divided into three-day competition (usually Friday, Saturday and Sunday).

At the end of each race, the times of each special stage are added up and the victory goes to whoever has the lowest time.

The races are held on all types of tracks: asphalt, gravel, snow and ice depending on the location and weather conditions.

Although WRC and HSSE are two separate worlds they have aspects in common as well: a lot of training and practice. This is fundamental to achieve good results.

www.arteakltd.co.uk
We use cookies on our website to give you the most relevant experience by remembering your preferences and repeat visits. By clicking “Accept All”, you consent to the use of ALL the cookies. However, you may visit "Cookie Settings" to provide a controlled consent.
Cookie SettingsAccept All
Manage consent

This website uses cookies to improve your experience while you navigate through the website. Out of these, the cookies that are categorized as necessary are stored on your browser as they are essential for the working of basic functionalities of the website. We also use third-party cookies that help us analyze and understand how you use this website. These cookies will be stored in your browser only with your consent. You also have the option to opt-out of these cookies. But opting out of some of these cookies may affect your browsing experience.
Necessary Always Enabled
Necessary cookies are absolutely essential for the website to function properly. These cookies ensure basic functionalities and security features of the website, anonymously.
Functional
Functional cookies help to perform certain functionalities like sharing the content of the website on social media platforms, collect feedbacks, and other third-party features.
Performance
Performance cookies are used to understand and analyze the key performance indexes of the website which helps in delivering a better user experience for the visitors.
Analytics
Analytical cookies are used to understand how visitors interact with the website. These cookies help provide information on metrics the number of visitors, bounce rate, traffic source, etc.
Advertisement
Advertisement cookies are used to provide visitors with relevant ads and marketing campaigns. These cookies track visitors across websites and collect information to provide customized ads.
Others
Other uncategorized cookies are those that are being analyzed and have not been classified into a category as yet.
SAVE & ACCEPT